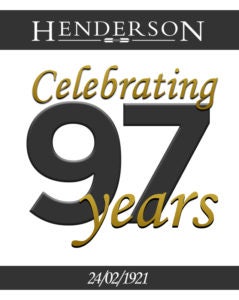 P C Henderson is very pleased to have celebrated its 97th Birthday at the weekend!

Founded by Percy Cecil Henderson on 24th February 1921, the company began in a small office and warehouse built on the premises of a paint and varnish factory in Barking, Essex. Since then we have gone from strength to strength with subsidiaries in Ireland, Holland and China as well as exporting to over 70 countries worldwide.

Our 97th year as a company has seen a lot of exciting new developments and changes - let’s take a look:

Our 97th year has seen some exciting new product developments including the launch of Securefold Bottom Rolling, Soltaire Kit Packs, Soltaire Centrefold and Endfold along with a new and improved automated Evolve system. New product development projects for our 98th year have already started and we look forward to bringing more new and innovative products to the market.

New Tools for Our Customers

Due to the success of our first set, we launched four new installation videos for some of our most popular kit packs including Soltaire, Rustic, Imperial and Loretto. We also produced our first company video and ‘Product Focus Video’.

Results of our annual survey told us that our customers would favour an all in one product brochure. We listened to this feedback and developed our new 136 product catalogue which has been very well received.

June 2017 saw us go onto win ‘SME Exporter of the Year’ at the North East Exporters Awards – we’re also pleased to announce that we have been shortlisted in the ‘Export Award’ category at this year’s North East Business Awards. It’s great to see the hard work of our amazing team being recognised.

Projects Across the Globe

Being a manufacturer we don’t always get to see where our products end up – but when we do, we love it! This year has seen our hardware specified for some major projects across the globe including the Four Seasons Hotel in China, Kandahar International Airport in Afghanistan as well as a feature on Grand Designs!

All in all our 97th year has seen a lot of changes and a lot of successes! Great to be almost a 100 years old and still going as strong as ever!