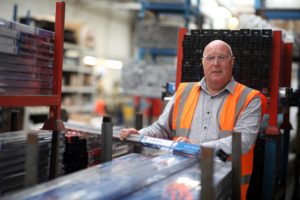 In light of recently being announced as a finalist in the British Chamber Awards, our Managing Director, Trevor Cossins, recently sat down with Kay Wilson, PR Manager at the North East England Chamber of Commerce, to discuss the growth and development of P C Henderson over the years. Read the article below or online here.

P C Henderson, based on Bowburn Industrial Estate, has been a household name for decades and to work with them is seen as a badge of honour around the world.

This honour could soon be boosted with a national award as it has been selected by North East England Chamber of Commerce to represent the region in the British Chambers of Commerce national awards held in London in November.

The business has grown hugely from its roots which started in 1921 in the South East. It moved to the North-East in 1969 due to its need for bigger site and the region’s reputation for a great work ethic.

Today its vast range of sliding and folding door hardware is sold to more 70 countries from its manufacturing plant in County Durham.

Managing director Trevor Cossins, two and a half years into his role, has spearhead the current growth spike and explains the history that helped lay the foundations for its success.

He says: “The initial big boom time for us was in the 1960s with the huge, national construction programme for housing estates. At that time we produced garage doors and it was estimated that around 50 per cent of all garage doors installed in the UK were that of Henderson. Eventually the market became extremely saturated and the bold decision to sell the garage door side of the business was made in 2008. This was a decision that has most definitely paid off as it has allowed us to focus solely on the sliding door hardware side of the business.

“We found there was much more business to be gained by concentrating on the sliding and folding door market, which is where our expertise and high quality manufacturing lies.

“When I joined the company I set out a deliberate policy to ensure we were much more closely connected to our customers. We constantly do market research so we are always totally clear on what is needed for us to supply the very best products and services to the marketplace.

“Results from these fact-finding exercises gave some great insights into our marketplace. For example, we found that our Chinese customers have very different product requirements based on their installation procedures. We see huge potential in China with the boom in five star luxury hotels where the quality of our range is an excellent fit for their requirements.”

Export sales currently account for 70 per cent of the total company sales and the company employs 56 people in Bowburn. Mr Cossins sees plenty more opportunities to increase these figures with expansion of marketplaces in Germany and Central Europe as well as Asia.

“We have a number of German speakers in our business and we will be exhibiting at two major trade shows this autumn in Berlin in November and at Munich-based Bau in January.”

The company doesn’t just sell on to architects, specifiers and developers, it also works with a number of national household name retail brands. Mr Cossins adds: “Our growth and the chance to go to the BCC awards to compete with the best exporters in the country, is tremendous for us. Traditionally we have been a very humble business and its time we recognised our own achievements.”